The first week of pre-release public testing of the Apex sandbox has proven once again the value of this approach. Combined with our own thorough tests, your feedback has contributed to many tweaks and fixes already. At the small cost of a slightly skewed first impression due to the work-in-progress nature of the content, this will lead to a more solid release on July 11. Note that most changes arrive first to the daily experimental Dev-Branch. We then selectively merge these to the Apex Sneak Preview and RC branches, which are updated periodically. The update processes are running a little slower than we're used to, because of the large amount of data and increased branch count. It has also been quite remarkable to see a wide range of mods release compatible versions within days, and in some cases hours, of content staging. The hard work of teams like Exile, GetWrecked, various Life incarnations and others will provide players with a great many options come full release. There's still plenty to polish, so we'll get on with it!

Happy birthday Arma! On June 22, it's been 15 years since the series' first entry was released in Europe: Arma Cold War Assault. Since then, over 10 million copies (excluding DLC) have been sold, of which 2.5 million for Arma 3 to date. On behalf of our company and everyone who has worked on Arma, we'd like to thank all players, modders, units, server admins, moderators and all other people who have supported the franchise along the way. To celebrate, we're hosting the best deal ever, with 15 years of Arma at 15% of its current price (special bundle of all released Arma games and DLC) - one day only, exclusively on the Bohemia Store. Cheers to another 15 years!

One of the first things greeting you when starting the game after Apex (1.62), is an overhauled Main Menu. One of the goals was simply to apply a fresh coat of paint, as we've done for the game itself with the Visual Upgrade. After a few years of playing the game, and with more years to go, having a splendid new entry point to gameplay was desired. In addition, several of our designers have taken a look at the User eXperience of the interface and made tweaks to how elements are arranged, presented and interacted with. One part of this was to re-focus on the center of the screen (most other displays were also centralized). This is also where we placed several visually-pleasing spotlight tiles for the content we want to promote (or mods want to promote!).

Another aspect of the Main Menu is the terrain-specific cutscene played in the background. Throughout the Arma series there have been various approaches. Before Apex, our terrains showed a drone-like feed with combat going on in the distance. Now we've gone with a series of static scenes that showcase the environment, and provide more stable performance at the same time. Of course mods can tweak the UI and these scenes. Head over to the Community Wiki for the documentation.

Entertain yourself with the "Water in your Eyes" mission cinematic about Dutch unit 11th Air Manoeuvre Brigade. It shows them executing a naval anti-piracy interception using assets from the FFAA mod. Nice editing Lorrio! 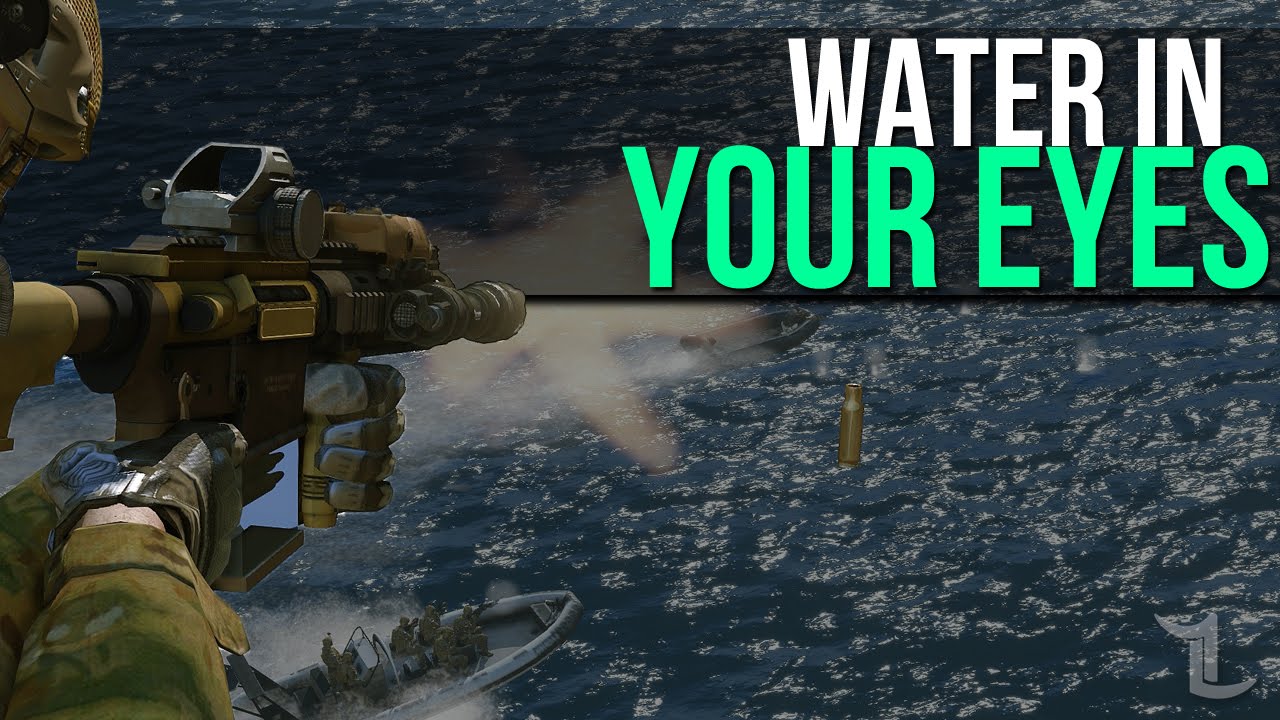 Logistics are essential on the battlefield. After introducing features like Sling Loading for helicopters, we wanted to offer another important capability: carrying vehicles inside larger vehicles. This will open another avenue for commanders to move their assets across large distances, for example between the islands of Tanoa. The first version of Vehicle-in-Vehicle Transport is available on Dev-Branch, where it will be iterated for a little while before taking it to other versions. So far, the new VTOLs have been prepared to load any suitable vehicle in the vanilla sandbox, from the new LSVs to existing light armored vehicles. In some cases you may even load up multiple vehicles. In the future we'd like to prepare our larger pre-Apex aircraft for this as well, but that requires some additional work. Cargo vehicles do not need setting up for the most part, as load capacity is determined based on their actual bounding box dimensions and weight. One very cool aspect of this feature is the ability to eject cargo vehicles mid-flight and have them be parachuted down (depending on altitude and pilot skill!).

In our wildest dreams, we envisioned this feature to also mean you would drive up a vehicle ramp and park the vehicle manually. However, after experimenting with this and similar approaches, we learned it wouldn't be feasible to deliver, given reasonable resources. These attempts caused complex problems with AI, animations and physics. We want our engine-based features to be fully available for: AI, commanding, waypoints, multiplayer, Eden Editor, Zeus, mods, etc. That's why we've decided to implement the feature in a more abstracted way. For technical details and available modding options, check out the Community Wiki documentation (more information coming, including script command references). Give the feature a go yourself, build some simple scenarios around it, and discuss your evaluation on our forums. Programmer-Designer duo Tomáš Nezval and Karel Kališ are monitoring for any reported issues and potential tweaks. We definitely think it will allow for some very cool gameplay and large combined arms operations.

Advanced mod teams may enjoy a new command-line version of Publisher that was prepared by Senior Programmer Jiří Polášek. On, and it supports skins! The tool can be experimented with on the Arma 3 Tools Dev-Branch.

Deep in his secret lair, Senior Programmer Krzysztof Bielawski has been experimenting with significant AI driving enhancements. Before we describe this effort more, we should make it clear that this tech will not be part of the 1.62 update yet. It requires more work and testing of all content. Once finalized, our hope is that especially vehicle path-following will have improved. It should teach AI to navigate through narrow roads and urban areas more effectively. Other AI challenges being looked into are formation holding and convoy driving. There is also a powerful new modding opportunity as it allows a per-vehicle behavior to be configured via a new driving component in vehicle simulation. On top of this it has been a general refactoring and optimization of the code. A first iteration, tweaks and fixes have already gone live on Dev-Branch, so let us know how it's working and get more Intel straight from the source!

There will be a brief interruption in our regular activity this Thursday and Friday while all Bohemia Interactive teams meet up for a company-wide event. This will affect Dev-Branch and other branch updates, as well as our interaction on the various communication channels.

Until next week, let's join these Tanoan locals anxiously awaiting your arrival to their homeland.