While the maintenance, documentation and planning work continues for the primary Windows version of the game, the time is right to give some love to our experimental client ports for Linux and Mac. Having been in development and testing for a long time, we have today published the 1.58 version (including Eden Update) for the ports, made possible by our Virtual Programming partners.

Besides adding the Eden Editor and all other improvements, one major multiplayer limitation was overcome: BattlEye anti-cheat is now supported for these ports. For a full and up-to-date overview of the remaining limitations, Frequently Asked Questions and other information, please visit our overview page. The next target for the port team, we hope, is Apex actual (update 1.62).

If you're new to Arma 3, the official singleplayer showcases can be a great entry point to experience the diversity of the game's military gameplay (Main Menu > SINGLEPLAYER > SHOWCASES). They are bite-sized scenarios that were first introduced to highlight particular features for the public Alpha and Beta releases several years ago. The collection kept growing with further platform updates and DLC. For your typical combined arms infantry gameplay, you should try: Infantry, Combined Arms and Armed Assault. It can also be refreshing to play from the CSAT perspective, so give Vehicles, Helicopters, Gunships and Marksmen a go. The most recent showcase introduces you to the End Game mode on Tanoa. Did you know there's a hidden cache in Ouméré? Or that flying very fast or very high in Fixed-Wings will trigger a vocal pilot reaction? Trying any 5 showcases will unlock the "Showtime" Steam Achievement, which 6.6% of players have done thus far.

The showcases are not only interesting to new recruits; veterans and those who've played them before may find replaying them very entertaining with all the usability and audio-visual improvements over the past years! Scenario designers who are interested in how to achieve the standardized presentation elements, should visit our Community Wiki for details on setting up the overview and loading screens, notifications, debriefings and more.

Check out the nicely put together overview video on "Operation Bazar" by the United Kingdom Special Forces unit. We enjoy seeing and sharing these types of videos, so keep them coming!

Eden Editor may have had its main release, but that has not stopped its developers from adding more improvements. Advanced designers may appreciate being able to search even by config class name in the Asset Browser. Do this by using a search query formatted like "class MyFirstClass". Several special entity attributes were also improved / added on Dev-Branch recently. The "Texture" attribute can make it easier to actually display media on the props with dynamic screens or other changeable surfaces, such as desktop monitors and ... water balloons! And for characters, "Stance" lets you pick the starting pose conveniently. By the way, did you know you can drag & drop the camera on the 2D map? Keep an eye on the change log for other useful tweaks and changes.

If you're new to Eden Editor, we recommend to take a look at Jester814's recent video tutorial episode. In it he shows some of the basics, compares differences to the old editor and shares tips. If you're looking to set up a simple PvE co-op scenario with Zeus and features like Arsenal and Revive, this is a good starting point. He also covers some of the extensive (multiplayer) scenario settings, such as those controlling the respawn system. The resulting 'template' is available on Steam Workshop. 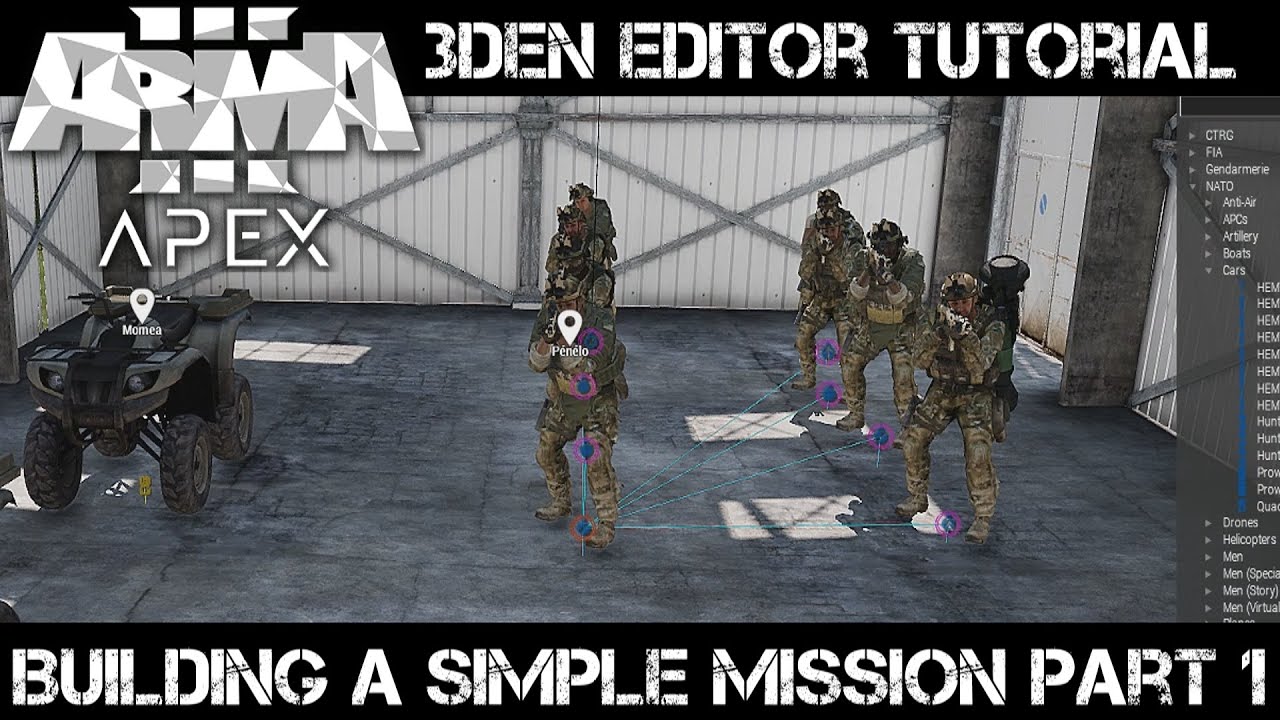 A nifty new feature has arrived to Launcher on Dev-Branch: the ability to export and share mod presets with other people. You'll find a new option in your preset manager, which lets you share the preset by saving it to a HTML file. This file can then be dragged and dropped to anybody's Launcher. Preset sharing can be particularly useful for units who want to provide a quick way for members to set up the correct mod set. Initially this feature would only support Steam Workshop mods, but Senior Programmer Jiří Polášek has since added the ability to export also local mods. Please do note that while Workshop mods will be resolved automatically, local mods still require players to obtain and install them manually. Your feedback on the Launcher is still very welcome on our forums.

One of the on-going efforts is to further improve, clean up and document the script command set, while preserving backward-compatibility as much as possible. However, please be aware of a tweak to relatively new script command shownScoreTable, as it will be made more consistent with other similar commands. It will also be complemented by a new visibleScoreTable command. These changes are to be part of the upcoming 1.64 update.