reported by Thomas Ryan on September 8, 2016

It's been over a month since you all first got your hands on Arma 3 Apex and, with it, our first Arma 3 co-operative multiplayer campaign: Apex Protocol. By now, many of you have had a chance to play it. Some of you have even been diligently providing us with feedback on your experience, which everyone here on the Arma 3 team has been keeping a close eye on following the release.

Thanks to your feedback, we've been working on some significant changes and improvements to Apex Protocol which will be making their way to you as part of Arma 3's upcoming Update 1.64. As part of this effort, we'd like to take this opportunity to establish the motivations behind these changes in order for you to have a clearer picture - when they go live - of where we came from, where we are, and where we're going.

Among others, Apex Protocol had 2 major goals: promote co-operative multiplayer gameplay in Arma 3, and be a driving force behind various highly-anticipated improvements to our multiplayer infrastructure. As our first official multiplayer campaign for Arma 3, it was an opportunity for us to identify and answer a series of long-standing design questions, improving the basis upon which we can build future content, both singleplayer and multiplayer. As the first official campaign we've made since The East Wind, it also presented us with an opportunity to reflect upon our experience up to that point, analyzing what went well, what went wrong, and culminating in drastic improvements to our user experience, internal pipelines, and overall standard of quality.

But - and you all knew there'd be a "but" - it was certainly not perfect. Some players felt let down by the multiplayer focus of the campaign, expecting instead the "singleplayer first, co-op second" approach of our Arma 2 campaigns Harvest Red, Operation Arrowhead and Operation Black Gauntlet. Others criticized the fact that, indeed, missions could not fail in any official sense due to the lack of a limit on respawning. Other criticisms included a lack of AI subordinates occupying empty player slots, missions not using enough of the new assets introduced as part of Apex itself, saving & loading being disabled, and a generally simplistic approach to mission design.

A few of these criticisms are simply victims of the development process. For example, one mission in Apex Protocol originally featured NATO's new V-44 X Blackfish VTOL quite heavily, but it had to be reworked as various unforeseen circumstances resulted in the asset not being ready in time for us to release the campaign along-side the rest of Apex, avoiding the episodic, post-release method we employed with The East Wind. However, we recognize now that we missed a few things while underestimating the importance of others. The fact that missions can't be failed was an issue that we definitely failed to judge the significance of, and one that must be addressed. On the flip-side, some of these issues are a direct result of design decisions we made at the very beginning of development, especially the focus on multiplayer. To change them would be a fundamental shift in our vision for Apex Protocol, Apex itself, and in what we set out to achieve. Though things aren't perfect, we don't want to turn Apex Protocol into a Frankenstein's Monster of different, competing design visions.

One thing is certain: work on Apex doesn't stop at launch. Far from it. Changes are inbound, Apex Protocol included. With Update 1.64 just around the corner, let's take a moment to discuss the major improvements aimed at addressing some of these issues which you, yourself, can look forward to seeing very soon.

Players on the Development Branch have had access to improved difficulty settings for Apex Protocol for some time now. This effort, which began almost immediately after release, is aimed at addressing one of the most significant issues facing Apex Protocol: missions can't fail. To achieve this, we have given Hosts control over an array of settings for both Respawn and Revive, making a conscious effort to accommodate a wide range of playstyles. We also allow for players to disable both systems outright, a decision made, in part, to accommodate those using mods with their own respawn/revive/medical systems. Should all players be dead or incapacitated, and respawn unavailable, missions will now end in failure. 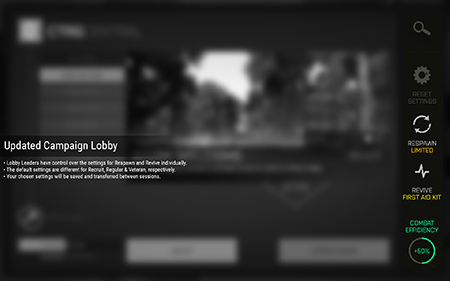 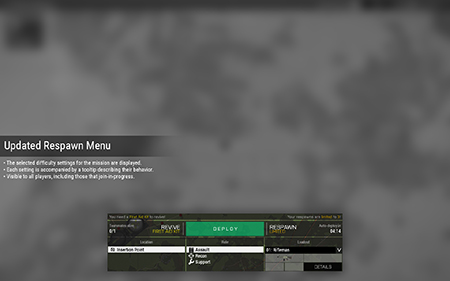 The "Limited" Respawn setting is possibly the most significant addition here. We concluded early on that unlimited respawns went against Arma's mantra - that every bullet could be your end, and death is permanent - even though it is easily the best option for less-experienced players and public sessions. However, we also knew that disabling respawn should be reserved for veterans and those playing with mods. We had to find a middle-ground, which materialized in the form of using our existing Respawn Tickets systems. Players would share a pool of Tickets, and each completed task would award Tickets proportional to its difficulty.

As mentioned above, the primary goal of Apex Protocol was to promote co-operative gameplay. What we found was that this "sharing of resources" put a much greater emphasis on players reviving each other over respawning, while discouraging respawning just to replenish your loadout or skip closer to the action, both of which were legitimately detrimental to the co-op experience before. Furthermore, awarding Tickets upon the completion of tasks resulted in players being more inclined to co-operate and attack the same objectives, rather than sometimes chaotically attacking any objective they want, like they may have before. Amusingly, this system has already lent itself to memorable gameplay "snapshots", such as surviving players hitting 0 Tickets, desperately trying to collectively push the objective and, finally, breathing a legitimate sigh of relief when "1 TICKET AVAILABLE!" appears on-screen.

Since being deployed to the Development Branch, we've already made some notable changes based on player feedback. Players correctly pointed out that the "Medic Only" Revive setting is actually tied to the presence of a Medikit in the player's inventory and, furthermore, we don't have an explicit "Medic" class in the campaign. We do, however, have the "Paramedic" class. As such, the label was adjusted to "Paramedics" to reduce confusion. Another change was to the design of the new Respawn Menu, pictured below. While definitely not a radical design overhaul, we do consider it to have made some significant improvements to readability and user-friendliness as opposed to the original design. 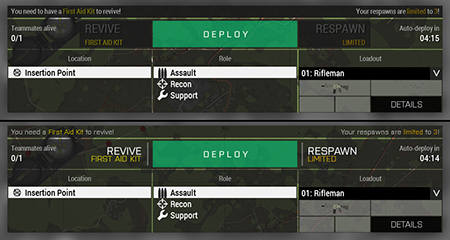 In the end, the team has learned a lot from the development of Apex Protocol. When we first set out on the #RoadToApex, we identified many significant gaps in the platform that needed to be filled, and many design questions that had to be answered, if we were to drive Arma 3 forwards. 2 years later, having successfully released our first co-op campaign for Arma 3, the changes are significant and far-reaching: we now have an official Revive system, something we identified early on as critical to producing co-operative multiplayer content. The Respawn Menu was overhauled, fixing long-standing issues and providing a far superior user experience. Quick Play was introduced, allowing you to easily jump in to your favorite game modes at the click of a button. Tasks were completely overhauled, improving every aspect of their design and introducing Shared Objectives. Under the hood, massive optimizations to performance and networking have taken place, resulting in a much smoother and stable gameplay experience for everyone.

All of these efforts were driven by the need to deliver a co-op campaign for Arma 3, a goal we have realized with the successful release of Apex Protocol. It's already one of the Arma franchise's most-played pieces of official content, with over 200,000 player hours being invested in it for the first week of release alone, beating out all of the major unofficial multiplayer modes like King of the Hill, Altis Life and Exile (for a little while, at least! :)). This was a remarkable and, truth be told, unexpected accomplishment, especially when we would open our (new & improved!) Server Browser to be greeted by upwards of 60 servers hosting it per day, even outside peak hours. Equally impressive was that the campaign held stable; very few bugs were reported compared to previous content releases, especially ones that would block a mission's progress. Players moved seamlessly from mission to mission, on both hosted & dedicated servers, with minimal interference. Clearly, the stability and success of the release was a substantial improvement over some of our past attempts. :)

It certainly wasn't all sunshine and daisies, however, as extensively detailed above. Nonetheless, we are confident that we are in a vastly superior position to deliver high quality playable content than we were when we started. We've learned a lot about keeping players together, encouraging team work, and what it means to build stable multiplayer missions. Even so, we still need to answer questions like saving & loading in multiplayer, maintaining immersion in multiplayer content, and ensuring there's enough gameplay variety so that missions don't feel repetitive. Apex Protocol's Difficulty Overhaul is just one of the ways we aim to do better post-Apex, and we look forward to what comes next.

Finally, we'd like to thank you, our dedicated playerbase, for being there with us along the way. It's not over yet.