At the time of posting this, we are just one day away from releasing the Arma 3 Contact expansion, and our alien visitors arriving! In this report we'll take you through all of the information about the expansion so far, and look a little at our plans beyond. We hope you'll all soon get to enjoy the 1.94 platform update, new sandbox assets, and our spin-off "First Contact" campaign experience!

For the most comprehensive overview of all the goodies incoming with Contact (on top of its singleplayer campaign), be sure to add the Sandbox Trailer to your watchlists. It takes you through pretty much all sandbox additions (vehicles, weapons, gear, etc.) - premium and free alike - supported by narration from our very own Writer and Designer Scott Alsworth. The video also features optional subtitles for 14 languages. 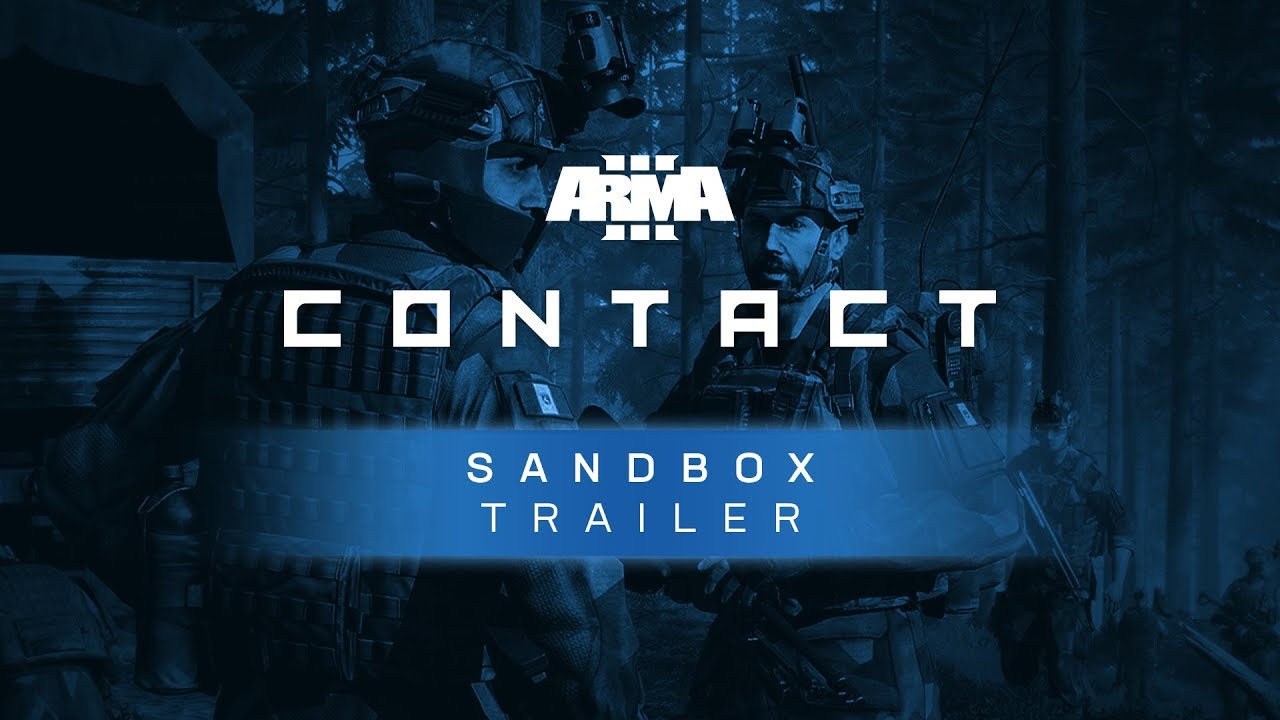 Another perspective on these sandbox additions is offered by a series of overview imagery we extracted from the in-game Content Browser (Left Shift + P from the Main Menu for example). It shows off all assets in themed series with descriptions. Did you also know that you can try any premium assets from the Contact expansion - regardless of ownership - in the Virtual Arsenal and Garage?

For a casual look behind-the-scenes, we've published a series of vlogs from inside the Amsterdam studio over the past weeks. Hosted by Brand & PR Manager Korneel van 't Land, several of the team members joined to showcase a particular asset, feature, or other aspect of development. In one of the vlogs, Technical Designer Maciej Pham shows off the ED-1 series of mini UGVs, or Eddie as we've dubbed it. Be sure to watch all the videos for extra ... special insights into our development processes!

One important part of Contact we've deliberately not detailed pre-release is its "First Contact" story-driven campaign. We've wanted to preserve most of its mystery and let all players explore it at the same time. For some sneak previews and hints you may find this interview an interesting read. Project Lead Joris-Jan van 't Land discusses with Only Single Player the inspirations behind the project, several gameplay details of the campaign, and more.

Looking to spice up your virtual surfaces with the Contact Key Art? Look no further. Find the official wallpapers in various resolutions on our website.

Or if you'd prefer to decorate real world surfaces, maybe the Livonia topographic map is something for you. A printed version can be purchased from the Bohemia Store. Players of the "First Contact" campaign will also notice the in-game version is actually the same there (only in Contact mode, not in the regular sandbox).

Finally, as you may have seen from its unboxing vlog above, there is a limited Bohemia Store exclusive Collector's Edition available. Besides the Arma 3 base game and of course the Contact expansion, it contains several physical items. Use the rugged field case to transport your equipement safely, stay in contact with the two hand-held radio transceivers, be safe while wearing tin foil hats, and more. We've only produced a very limited number of these, so get yours while supplies last!

As we've done since Arma 3's early years, much of Contact's components made their way to the public Dev-Branch and later RC-Branch. Right after the project announcement, we opened up the Livonia terrain to pre-order owners, and the feedback has been very useful as always. Many glitches were addressed, while some other topics sadly could not anymore. We do expect to make still more smaller tweaks to object placement post-release. Over the weeks to follow, we staged the weapons, character equipment, radio protocols, and lastly vehicles. Also with these we were very happy to receive your feedback. Please feel free to continue sharing it also post-release. We'll be reading it and doing our best to address what is feasible. Thank you very much for the support!

In a slight departure from previous releases, we did not stage the playable content ahead of release. There were multiple reasons for this. Mentioned before was our wish to preserve much of the mystery until release, but also there was a technical reason. The data for the campaign is stored in a Steam location for owners. Before full release, this data does not appear to download to all owners correctly, and this was not solvable in Steam. So now you will all get to enjoy "First Contact" at the same time. A dedicated feedback thread for the campaign will be opened of course.

Speaking of the campaign, this is where the PLAY CONTACT Launcher button comes into action. Use this button (or enable the optional Contact part in the DLC tab manually) to launch Arma 3 in its Contact 'Total Conversion' mode. This mode is intended to play the campaign most of all, and perhaps tinker a bit with your own singleplayer editor creations. For all other non-alien activities, just launch Arma 3 with the regular PLAY button and without Contact manually enabled. That will still give you the Livonia terrain, most conventional assets, and compatibility with multiplayer.

Of course another large part of this release is the 1.94 platform update itself, full of the usual collected fixes, tweaks, and additions. By all means check out the full SPOTREP change log once it's published, but let's highlight a few important notes:

Because of Contact consisting of a default component (Enoch folder - available to all Arma 3 players - always loaded) and an optional component (Contact folder - available to owners - manually loaded), server administrators may want to configure which part is allowed on their servers. Enoch platform data is signed by the normal A3 signature. Contact data uses a new A3C signature. The Arma 3 Server app has a main branch without Contact data, and a separate Contact Build branch with the data available. Set up a server as desired with the public keys present in Keys, and -mod=Contact or not. We'd like to point out again that Contact data is not developed for multiplayer and may not be compatible, so we expect most servers will not use nor load it.

So let's also take a brief look at what's next. The teams will be on the look-out for critical issues following the 1.94 release. If there are none requiring a hotfix, we'll start preparing for an eventual 1.96 update. It will of course contain fixes and post-release tweaks. But we also know about several other activities that we'd like to do as much as possible:

We cannot provide an exact timeline for this work, since our teams simply need some rest as well, and we will be planning our next project. But as always, we will provide as much post-release support as we can.

Although it happened over a month ago, we'd like to still report on the first update to Creator DLC Global Mobilization. Please head on over to their SPOTREP for the long list of fixes and improvements. The update size is rather large, which is an artifact of the EBO data encryption. Just as other DLC in the past, Steam is unable to use 'delta patching' for these files, no matter the scope of the change in a certain file. Only owners who have GM installed in Steam client will receive these updates.

On the topic of GM data, there is now a method for non-owners to play on GM servers. A Compatibility Data pack can be optionally subscribed to on Steam Workshop. Once downloaded and loaded into the game, you will be able to connect to servers using GM's non-terrain premium assets, and the usual Content Licensing system will kick in. While perhaps not the easiest solution, we hope it helps to at least split the multiplayer community a bit less.

On a final note, now is definitely the perfect time to start playing Arma 3 if you are not already (and somehow reading this any way!). Or perhaps you still have friends to convince to join the front lines? Since our last report there have been permanent price drops to the base game and many of the DLC packages. And perhaps the best deal of all is the new Ultimate Edition, which includes all currently released DLC developed by Bohemia, including the Contact expansion. It is set up as a Steam bundle, so you can also use it to complete your collection at a great discount.