The development locks that were in place during the last weeks of Apex development have now been lifted. This means our team members are free again to continue development under regular conditions. You may already notice this from the updates on Dev-Branch in recent days. We're also taking some time to reflect on the project together. This means we'll be looking back at both the journey and the destination, and creating action plans for a broad range of aspects to further improve upon. Besides our own thoughts, we also evaluate using your reviews, critiques, reports, stories, custom content releases and play-throughs ... and we're massively enjoying doing so. Keep sharing!

The newest dev photo shows a little supply drop we've sent out to a selection of gaming media outlets to promote Arma 3 Apex's release. Before you ask: there are no plans for delivering plants on a regular basis or to offer them for sale. It is quite difficult to manage the logistics, even though no casualties have been reported to us so far. We hope the recipients approach their new responsibilities with great care. And we'd love to hear how long their miniature jungles provide concealment to the plastic soldiers standing guard in the mud!

If you'd like to decorate your computer or mobile device desktop with the Apex artwork, you'll now find it available as wallpaper in a range of resolutions.

The youngest Bohemia Interactive studio, situated in Amsterdam (The Netherlands), has started recruiting for a few positions on its new development team. We're looking for talented and passionate developers to fill the roles of Senior Artist, Artist, Technical Artist and Audio Designer. Initially you'd be contributing to Arma 3's strong future, and then be on board for future projects on the horizon. Check out our careers page for all job offers in the company, and send us your application if you're interested. We look forward to hearing from you!

Ever since the 1.62 release, custom playable content designers have been releasing updates to their scenarios, modes and frameworks. A lot of them added variants on Tanoa, but they included many other cool new components, designs and approaches. Let us take a look at just a few of these projects that produce splendid content for the multiplayer community:

Can't get enough of the many sights and sounds made possible by Tanoa and the Apex sandbox content? CallMehTOMMEH has published his very own fan-made launch trailer. Those are some solid flying skills on display - kudos! 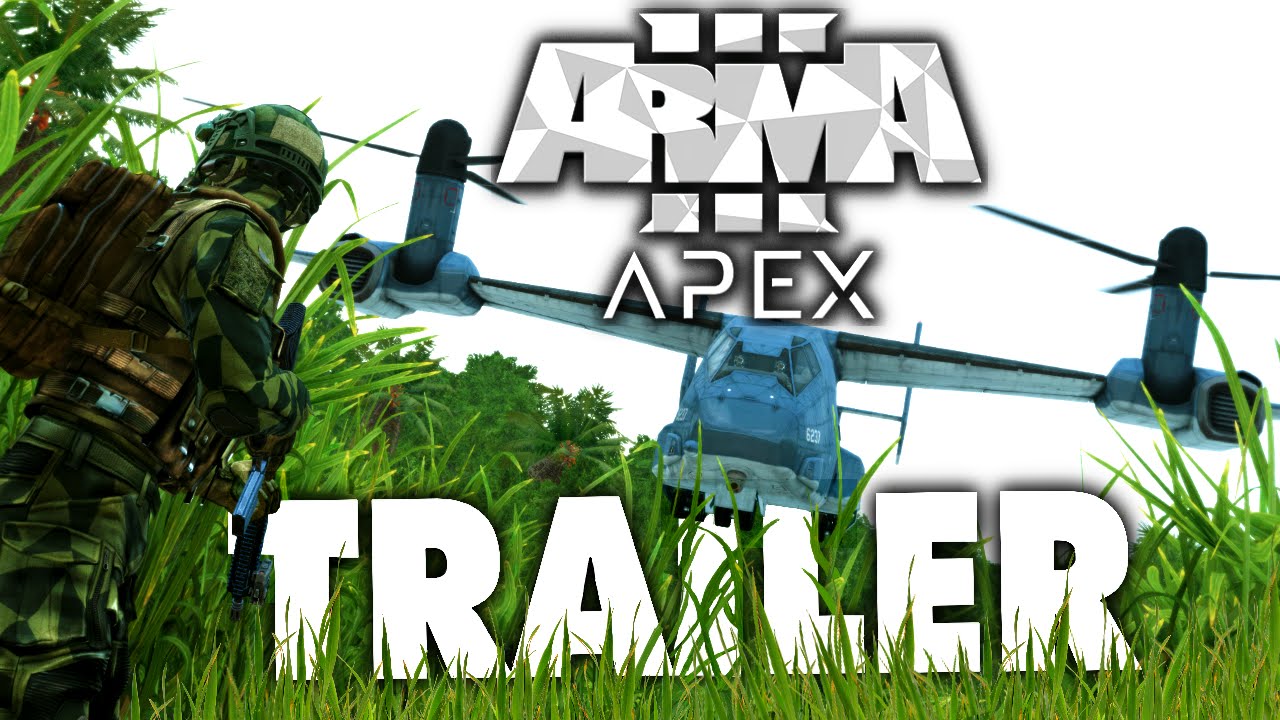 With Apex we've also doubled down on our efforts to improve the localization of the game for the 10 available languages. This is a uniquely challenging field as it can be difficult to ensure nothing gets ... lost in translation. The process starts with the developers putting in the raw texts, but then goes through a whole pipeline to end up being proofread and translated by mostly external contractors. Dedicated testing of the game in the various languages also takes place. One tricky aspect is context. It can often be difficult for an external translator to know precisely how a phrase or single word fit into the game and how they should be translated. This is one of the things being coordinated by Associate Producer Vojtěch Schubert. He has opened a special thread on the forums to request your feedback for further improvements. It's focused on the Apex content, but any older texts can still be discussed as well. See a term that is out of place in Arma's military context? Encounter an unfortunate phrasing? Catch a string that's entirely missing translation? Let us know!

We are indeed working on adding livery and skin templates to Arma 3 Samples for Apex content. The sources are being gathered, and you'll likely find them first on the app's own development branch. We're also wanting to update our asset listing on the Community Wiki as a convenient look-up guide for class names and some characteristics. Meanwhile you can explore the in-editor Config Viewer. Something else still coming the way of certain players is the digital PDF topographic map for Tanoa in the Bonus folder of Digital Deluxe Edition owners (or owners of other editions containing the bonus content).

The new Main Menu has taken a more minimalist approach to the in-game news feed. Instead of directly showing a summary of recent Dev Hub reports, it links out to the relevant locations on the web. This will reduce our own upkeep of outdated systems, and we've always struggled with the limited formatting options for HTML content in the game's UI. As a result, after update 1.64 we'll no longer be maintaining these server-side news posts (at the moment the Legacy Branch still uses them). We don't have information of it being the case, but if any custom services were directly hooking into this legacy news feed, please consider alternatives. We use special URLs that always link to the most recent SITREP, SPOTREP or Dev-Branch change log for example.

Besides our more prominent Steam branches, there is one that contributes to a more stable game, but is really there just for advanced users (mostly server administrators in fact). This profiling branch is coordinated by Online Services Consultant David Foltýn, who is always there to liaise between server hosts and our programmers in order to pursue further (multiplayer) optimizations. The branch contains special performance executables with extended diagnostics, experimental technologies and upcoming crash fixes. These are often targeting just servers, but occasionally also require clients for compatibility. When there is a need, David also hosts special "CHIMERA" servers to facilitate testing. One feature being matured in this branch is an ability for servers to have automated control over clients who do not have an acceptable connection and who can have a negative impact on the entire session. This and other admin controls are discussed on our forums, while they are being tweaked and fine-tuned. We'd like to stress again that regular players should not use profiling branch, but we wanted to explain its purpose and to show one way in which a willing few are contributing to a better multiplayer environment. Thanks!