Our planned release for Nexus Update (1.54) was meant to be today, but last Friday we uncovered a few issues in large-scale multiplayer testing. Those should since have been fixed. We're going to confirm the fixes in follow-up tests this week to determine when we can publish to main branch. Please keep trying the Release Candidate and reporting any issues, especially new ones. We'll keep you apprised of further RC updates and the actual release timing via our usual channels.

The second round of the End Game Tournament was played and streamed last Saturday. If you missed the broadcast, and have a spare four hours, check out this recording. You could also visit Mic One's channel for edited highlights in the weeks after matches are played. One of its organizers, Community Developer Greg Becksted, drops by to give us the results:

"First up were the Quarter-Finals C where Armalusa of Portugal met OFCRA of France. Armalusa took the first game and OFCRA took the second game, in two quite evenly matched games. With the scores tied, anticipation grew to see who could take the win in game 3. In that game Armalusa secured the 'retrieve' task in Phase II of End Game, effectively netting them the win in the event the game would end in a draw. With this advantage under their belt, Armalusa took their time choosing to hold off on picking up the schematics till it was clear they would have a safe and secure path to their upload point. With only a few minutes remaining in the game, Armalusa picked up the schematics and started to make their way there. Being extra cautious, they kept the schematics secure and on-the-move, out of potential threat of them being taken away. The game ultimately did end in a draw, so Armalusa will be moving on the Semi-Finals.

Between the regularly scheduled C and D match-ups, we saw the exciting sudden death rematch between Tangodown and the Arma 3 Ambassadors team (read up on what prompted this in a past report). The first game in the rematch was very close with tremendous efforts by both teams that ended in a draw. Needing a win to make it to the Semi-Finals, both teams played in a second game without a dull moment, which ended with a back-and-forth struggle to gain control of the schematics. In the end and by a narrow margin, the Arma 3 Ambassadors team pulled off the win in game 2. 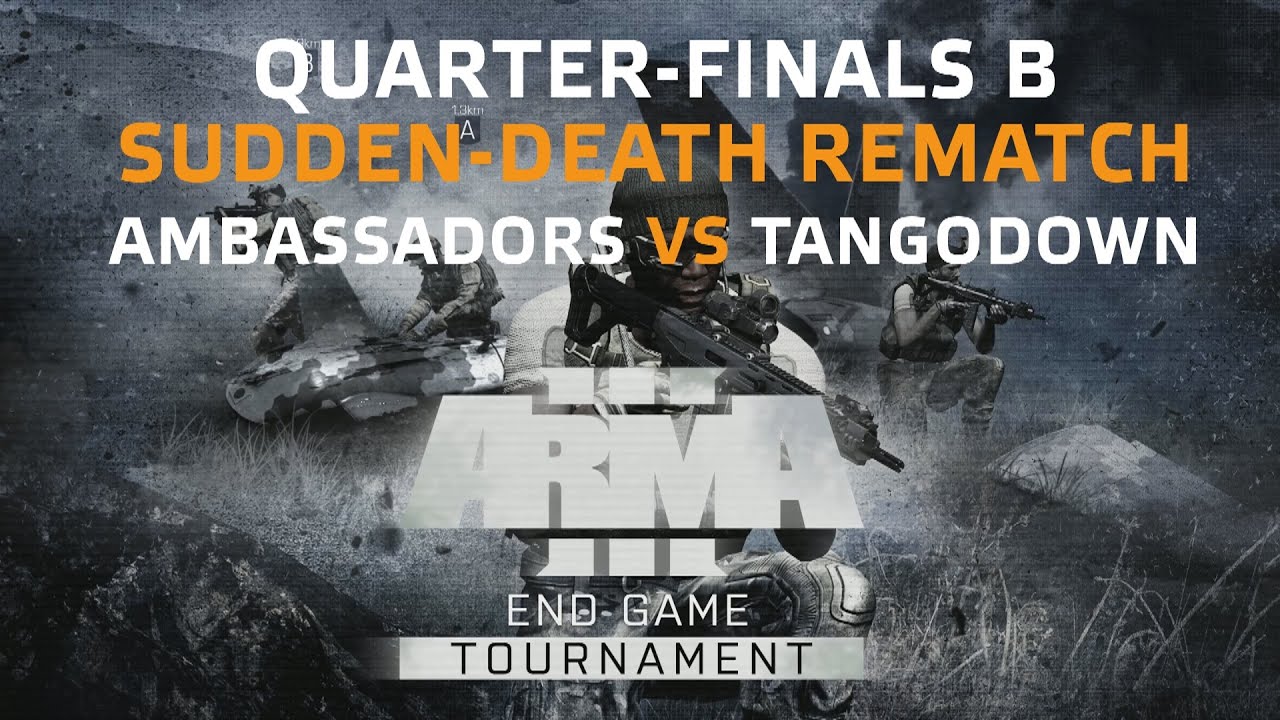 The final match-up of the evening, Quarter-Finals D, commenced with RG Task Force meeting Liberated Gaming. Both teams played with great determination. The teams reported, and we witnessed ourselves, some bad desync occurring, especially in the final game. The development team has since took on this issue with high priority and we feel that the main cause has been tracked down and the fix is currently being tested. In the end, RG Task Force was able to secure two back-to-back wins. A third game was played in keeping with the spirits of this tournament and was just for fun. RG Task Force advances to the Semi-Finals."

Stay tuned for the next round scheduled for Saturday November 28th, where we will see BI Dev Squad meet Arma 3 Ambassadors and RG Task Force versus Armalusa. These teams will now be competing to determine who will participate in the final match-up on Saturday December 5th and their chance to be the ultimate winner of the Arma 3 End Game Tournament!

This Friday and Saturday, Prague will host its annual indie Game Developer Session. Our very own Vojtěch Kovařič will be speaking on the topic of Quality Assurance, going over the maddeningly difficult task of testing an open and moddable platform and game. Three other Bohemia Interactive devs will host sessions on a range of topics, so if you have an interest in development, consider popping by!

We can finally get more specific about Arma 3 Units, our web service developed to connect Arma 3 players and groups. Explore the newest OPREP by the fine gentlemen behind this effort for details on the concept. You'll also read about the planned 'Foundation Release' surrounding the Nexus Update, closed beta participation and some hints of future plans. Greg a.k.a. BohemiaBeck has posted a thread on the forums with even more information and details on how to join the party early. If you're interested, take the time to read some of the replies, which reveal our hopes to bring features like a developer API and basic web chat in the longer term. Your feedback and suggestions are welcome as always!

The Stamina and Fatigue systems have received further tuning by their Task Force, with balances to timings across the board. Stamina recuperation and exhaustion rates have been improved, to keep the game decisive, yet fluid, while the availability of sprinting after reaching an exhausted state has been further restricted. To manage combat effectiveness when fatigued or injured, players can no longer hold their breath indefinitely, and will now need to learn and master the best times to steady their aim, to compensate for weapon sway. Hold breath timings have changed, while improvements to the system itself add new sounds and reward players for conserving oxygen. A subtle animation slowdown has been added to terrain gradients, bringing a deeper level of connection and encouraging players to make more tactical decisions about their environment. Finally, a pesky bug that allowed for players to recuperate stamina very quickly has been squashed.

We're also preparing to publish a Legacy Fatigue Mod as example modification with sources in Arma 3 Samples. Senior Designer Josef Zemánek has also uploaded an unofficial functional mod version on Workshop. This mod both provides a starting point to players and modders who wish to replicate the previous behavior, but also showcases the enhanced (scripted) control you can have over these systems. In addition, we hope to still better explain our motivations for these changes both on the forums and in a future OPREP.

Tools Commissar Julien Vida reminds us that the last step in a plan to reorganize our samples and connected data is about to be taken. We'll soon remove the licensed data packages branch from Arma 3 Tools on Steam. If you're still subscribed to this branch, you'll be automatically switched back to main branch. The data packages themselves are still available via our website.

We've received some questions about the release of Eden Editor. It's been on Dev-Branch for some time, so when will it come to everyone? The new 3D Editor will be part of the free Eden Update that is planned for early 2016 according to our roadmap. This is a pretty big tool within the game, so we always planned for a considerable public beta. Development is going very well, but there are still a few features that we'd like to incorporate in the primary release.