Along with the introduction of weapon sway and fatigue in the Bootcamp Update, we promised to deliver more meaningful and authentic weapon handling mechanics. Our initial plan was to replace more 'random' weapon movements with certain non-trivial, yet intuitive, patterns. The goal is to simulate the realistic behaviour of a firearm carried by hand and enable players to actually learn and master their weapons.

While the Bootcamp Update focused primarily upon the refinement of fatigue mechanics, the changes to weapon sway paved the way for more profound improvements in weapon handling. Now, with the next update set for deployment on the dev-branch, we would like to share a few words with our community and further explain our overall goals, specify what is about to be improved this time and how exactly it will be done. 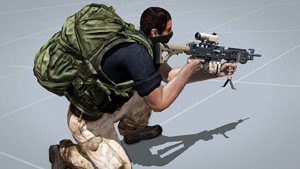 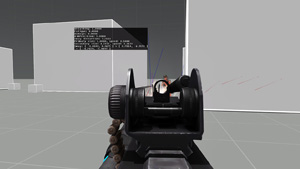 Although our basic goal seems to be quite clear, it also contains certain inherent discrepancies. In game, players face a vast dissociation between themselves and their weapons that is not present in real life. In short: mouse-controlled weapon movements can never exactly represent the handling of real firearms. Because of this, we decided to avoid blindly adhering to the specific mechanics of physical simulation and, rather, focus more upon the experience of selecting, using and mastering firearms.

We believe that this approach provides greater gameplay benefits than a more blinkered pursuit of 'realism', which mouse/keyboard peripherals can never truly provide. In other words, while we don't think that our mechanics represent the perfect physical simulation of real life weapon handling, we are confident that they enable authentic in-game situations, where skill, knowledge, and experience are vital. We want to encourage players to take a more thoughtful, considered approach; basically, to know that bigger does not always mean better - pick the right tool for the job!

An integral part of this endeavour is the upcoming introduction of weapon inertia mechanics. This new mechanism simulates the actual differences in handling of various firearms. While the word 'inertia' itself may suggest merely the simulation of the Newton's first law for weapons, there is also something more behind it in terms of various inertia-related effects. Basically, though, the heavier and larger the weapon is, the more difficult it is to hold a steady aim, either while moving around, while being fatigued or if suffering through injury.

Whenever you move your weapon, your sights becomes slightly misaligned in the direction of that motion. After this movement stops, a short period of time is required for the sights to realign. Controlled turning and fluent aiming without sudden, quick shifts is - more than ever - key for a steady aim. Also, the sway of the whole weapon becomes temporarily distorted by a certain degree, depending on your overall stance and the speed of cursor motion. We feel that these effects are much closer to what you encounter while handling weapons in reality than, for example, a weapon lagging behind the cursor or a slow down of the overall cursor motion.

Smaller guns, such as SMGs and carbines, naturally suffer relatively less sway distortion, while sight misalignment is less pronounced and takes far less time to correctly realign. Conversely, bulkier firearms, like longer-range rifles and machine guns, are distorted and misaligned by a greater degree and for longer periods of time. Also, bullpup weapons have their center of mass positioned slightly more conveniently for the shooter, so they have a small - but not negligible - bonus over rifles of more traditional design.

Over the next few weeks, we'll publish more technical documentation on the community wiki for those who would like to adjust our predefined behaviour and settings. For now, all the relevant parameters are to be found within the main configuration of Data_F addon. It should be noted that the internal workings of these mechanics are fairly complex, and all parameters should be tweaked together with care. Our implementation allows for the simulation of wide range of (im)possible behaviours and there are no strict boundaries for parameters / value ranges. The general rule of thumb is that exact values are not so important as the ratio of values between parameters of the same class, but feel free to experiment. Also, the script command "weaponInertia" returns the array of two values: current inertia in horizontal and vertical axis.

In addition to the basic size and shape of the weapon, attachments like scopes, IR-pointers, etc. are accounted for, too. Some of them, like the holographic collimator, helps you to cope with effects of sway distortion and sight misalignment, while most of others, especially suppressors and large optics with greater zooms, amplify these negative effects by various degrees.

Fatigue and damage suffered also contribute towards these effects, making them harder to handle and increases the time needed for sights to align back - all according to the particular weapon type and its attachments. It is therefore wise to consider all of this carefully when selecting your weapon and attachments and check out your desired composition in the Virtual Arsenal to make sure it is suitably adjusted for the upcoming mission.

With our weapon inertia mechanics we hope to achieve even more meaningful differences between various weapons and promote the appreciable benefits of smaller and subtle weapons over those large and bulky ones. Together with fatigue system, this should put even greater emphasis over the careful selection and purposeful optimization of your equipment. As always, we are eager to hear your feedback and we are really thankful for all the interest for our game and the time spent both playing as well as by providing your opinions and suggestions to us. It really helps us to make the game better.