The team behind S.O.G. Prairie Fire is excited to be soon rolling out our first update with many fixes and quality-of-life improvements, and new content to take you deeper into the Vietnam War Special Forces experience.

Right now it is only available on the RC-Branch for public pre-release testing, but it will be released to the main branch of Arma 3 very soon.

To get you started we have included 4 new Zeus missions and will be separately releasing on Steam an updated Mike Force mission for the new terrain. 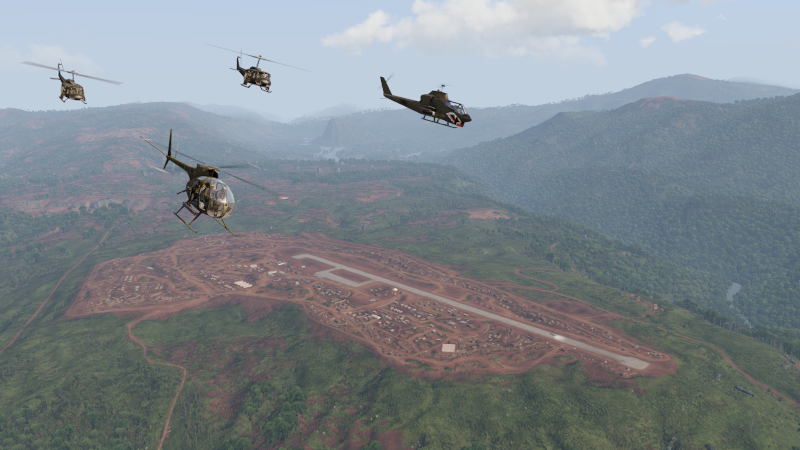 "The Only Easy Day Was Yesterday!" - so goes the motto of the US Navy SEALs. In Update 1.1 you can now play as one of the three primary SEAL groups that operated in Vietnam.

To expand the variation in other factions, there are also 5 new helmets with 8 variants to wear - netted pith helmets, the M56 and SSh40 helmets for PAVN and VC forces, and netted M1 helmets for ARVN soldiers. 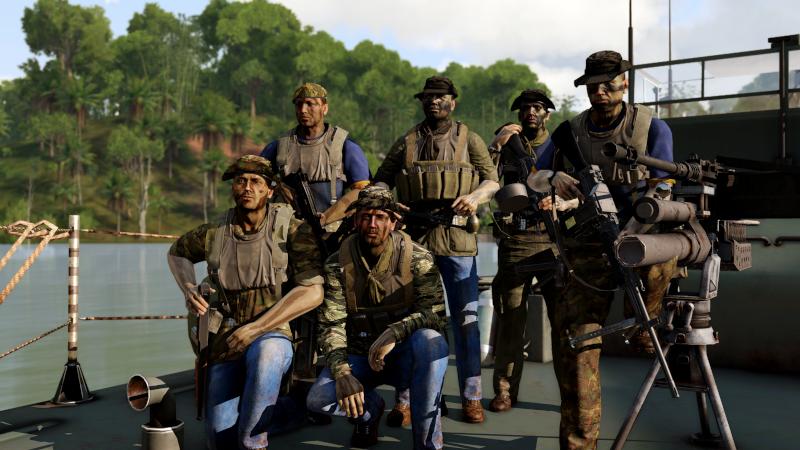 Update 1.1 features new vehicles to expand your gameplay options, especially in the urban areas of Vietnam. 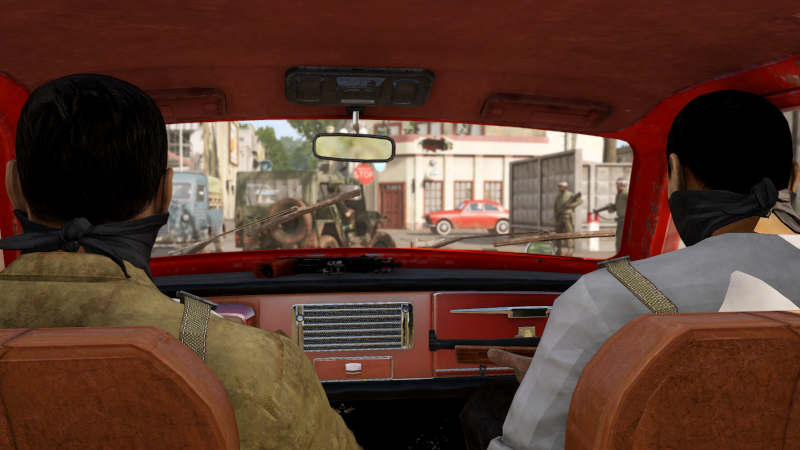 There are 4 new static weapons to improve coastal and base defenses: 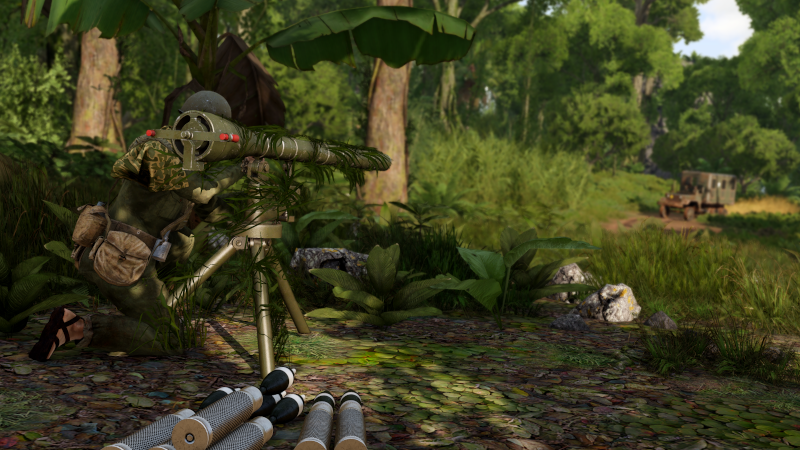 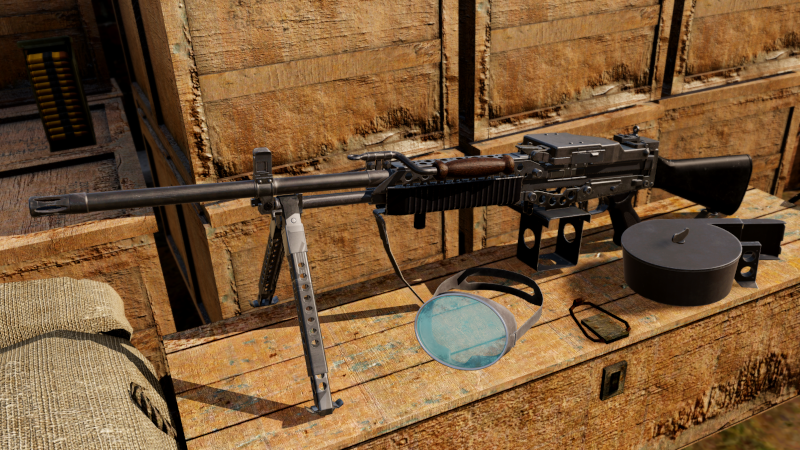 Since releasing S.O.G. Prairie Fire in May 2021, the team has been monitoring feedback from players, in our wishlist and especially in our feedback tracker and we are very grateful for all the detailed feedback, bug reports, and suggestions that have been submitted.

Although the Prairie Fire Multiplayer co-op campaign is not designed for singleplayer, in Update 1.1 progress saving has been added while exploring the campaign in multiplayer solo mode.

The team has completed approximately 200 feedback tickets in Update 1.1. There is a detailed list of the changes on here.

The team has been motivated and moved by the overwhelmingly positive feedback so far, and we have more updates planned, but we cannot confirm details to avoid any risk of broken promises! 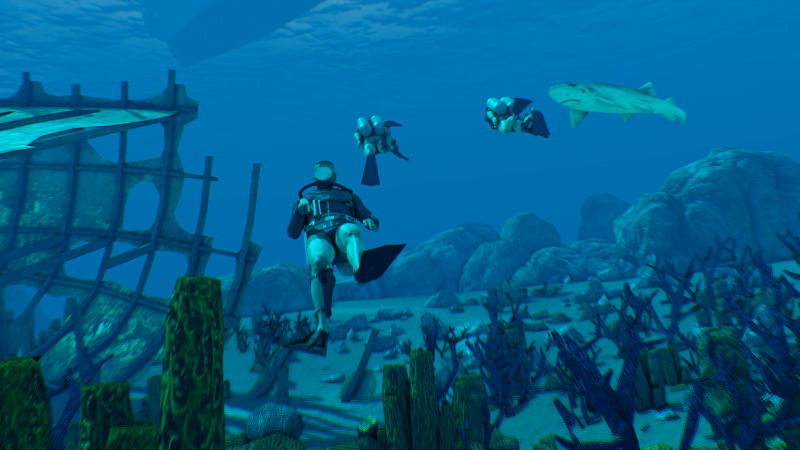 The energetic Prairie Fire player community has been a constant source of inspiration for the dev team since release. Here are some of the highlights:

Spoffy has published a Mike Force roadmap, with quality of life, strategic, and level up goals for the popular game mode, and the much-anticipated Spike Team will be added in the coming weeks. Mike Force has also been ported to Khe Sanh ready for 1.1 update release day.

The community screenshot competition run by Ceb.Cin in July led to some outstanding artwork being created, the best 6 creators were sent personal awards by SOG legend John “Tilt” Stryker Meyer. You can view the amazing art on YouTube here. Well done to all who entered!

All episodes of The Siege of Dak Long graphic novel by D.J. Teo are now available for free download. The author, a longstanding beta tester and friend of Tilt, is working on more stories and we hope to publish them soon!

Arma 3 wouldn’t be the success it is without the modding community. Most of Team Savage started out as mod makers. We’re pleased to see many players diving into Prairie Fire and creating mods for it, with about 40 scenarios now published on the Steam Workshop. Here are some of the most interesting addons:

The ACE team has been busy since before Prairie Fire was released, and wants everyone to know that they are planning to release their Prairie Fire ACE compat mod with the ACE 3.14.0 update, planned for shortly after the Arma 3 2.06 update. You can monitor progress here. We can’t wait!

The popular ACRE2 radio mod has been released for Cam Lao Nam terrain, enabling their authentic radio simulation for players on the first Prairie Fire map.

Edaly Projects Tiger has been causing a stir in the player community. Never get off the boat!

The Military and Veteran Gamers charity (MVG) does some excellent work to offer peer-to-peer support for veterans who play games online. To support their work, Team Savage has partnered with our SOG veteran advisers and a group of awesome streamers to take part in the SOG Charity Jungle Run - a 24-hour live-stream of the SOG campaign, and playing the updated Mike Force mission on the new Khe Sanh terrain.

There are also several live Q&A sessions planned during the event with MACV SOG veterans, MVG’s directors and Team Savage developers. We will be discussing all things SOG, combat experiences, and how to improve stress resilience. All proceeds go to MVG charity and will be spent on supporting veterans welfare.

Please join us in showing your support for veterans by spreading the word and watching the SOG Charity Jungle Run - details of the event can be found here.