Since the first release in 2001, games in the Arma series have featured an in-game 2D editor. It has been a powerful tool for designing scenarios, from simple military operations to story-driven blockbusters. Tens of thousands of user-made scenarios were released over the years, played by hundreds of thousands of players. And even more probably went unpublished, created by people out of curiosity, or just for fun and to play around in the sandbox.

A lot has changed since the 2D editor first appeared. The game has changed. The ideas have changed. Ambitions changed as well. But the editor did not. Until now.

Welcome to the Public Beta of the long awaited Eden 3D Editor. 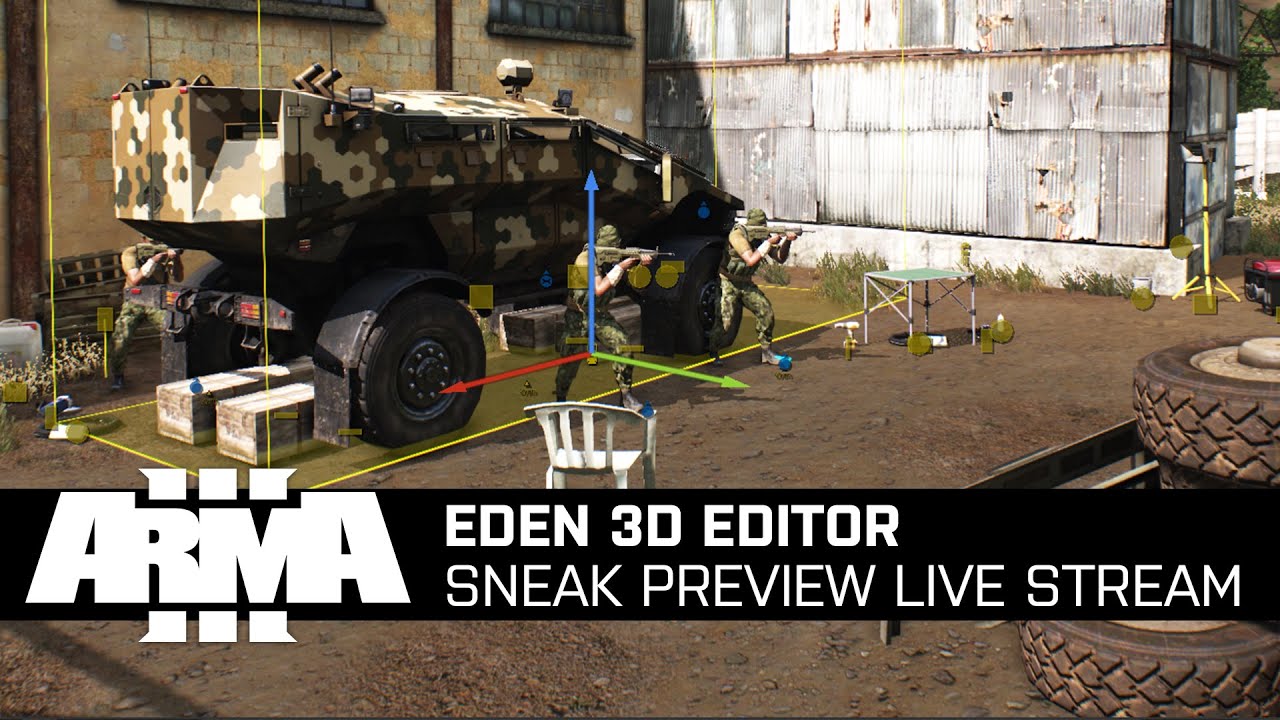 So what to expect from the Beta? First and foremost, please acknowledge it's not a finished product, and it will keep evolving - new features will be added over time, while some existing ones may be updated and behave differently. We'd like to avoid making your content incompatible, but the risk is there.

For this reason, scenarios created in Eden Editor Beta cannot be played in main branch (until the editor is released there), and cannot be published to the Steam Workshop. What happens in Beta stays in Beta.

What is the advantage of this approach? We're flexible. If you have an idea for an improvement, let us know! The big green Feedback button on the toolbar will lead you straight to the Feedback Tracker where you can report an issue or post a suggestion. And the official forums are a great place to discuss changes and ideas. This is your editor, help us build it!

Let us take a look at some of the most important new features, as compared to the 2D editor:

And much more, take a look yourself. If you've worked with the 2D editor before, we recommend to check the in-editor "Switching from the Old 2D Editor" tutorial.

The Public Beta is out, but that's just the beginning. We're planning to release periodic updates, sometimes on a daily basis, sometimes with longer intervals. We'll be announcing all changes in the in-game Updates Log to help you stay in touch. This will continue for several months, and then, at the beginning of 2016, we're planning to publish the Eden Editor to the default main branch. For free. For everyone.

But, until that happens, there's a lot of work ahead of us. Here are the most important planned features:

No, not modding using the editor, but modding the editor itself. Thanks to the full script support, almost everything is customizable now. User-made plugins can access any data from the currently edited scenario (hint for scripters: it really is just a scenario, any command will work), and enhance it by providing new systems and tools. We're in the process of writing the necessary documentation, and will let you know once it's finished.

The Fate of the 2D Editor

But what about the old 2D editor, which many of us have used for more than a decade? Don't worry, we're not killing it just yet. While the Eden Editor is in Beta, the 2D editor will exist alongside it, and it will remain the only way how to design scenarios in the default branch.

Even after Eden Editor is officially released next year, both editors will coexist together for some time, giving everyone enough time to switch. But once the Expansion is out, we'll aim to remove any trace of the 2D editor, and the Eden Editor will become the official tool. The king is dead, long live the king.

Thanks for participating in the Beta, and we're excited to see all your splendid creations!