We're getting closer and closer to Eden Update's release. There are a few fixes we'd like to confirm via in-house multiplayer tests. Play-testing the publicly available Release Candidate for 1.56 is still very relevant as well. If you do spot new issues, let us know on Feedback Tracker and share the link on the forums to make sure we catch it. We'd like to release the update this week if we can, so stay connected to our usual channels.

The prime component of Eden Update is without a doubt the Eden Editor. We've recorded a new behind-the-scenes dev diary to introduce the free tool to everyone. Join Filip Sádovský, Karel Mořický and Jay Crowe for an exposition of the key features and the development process. 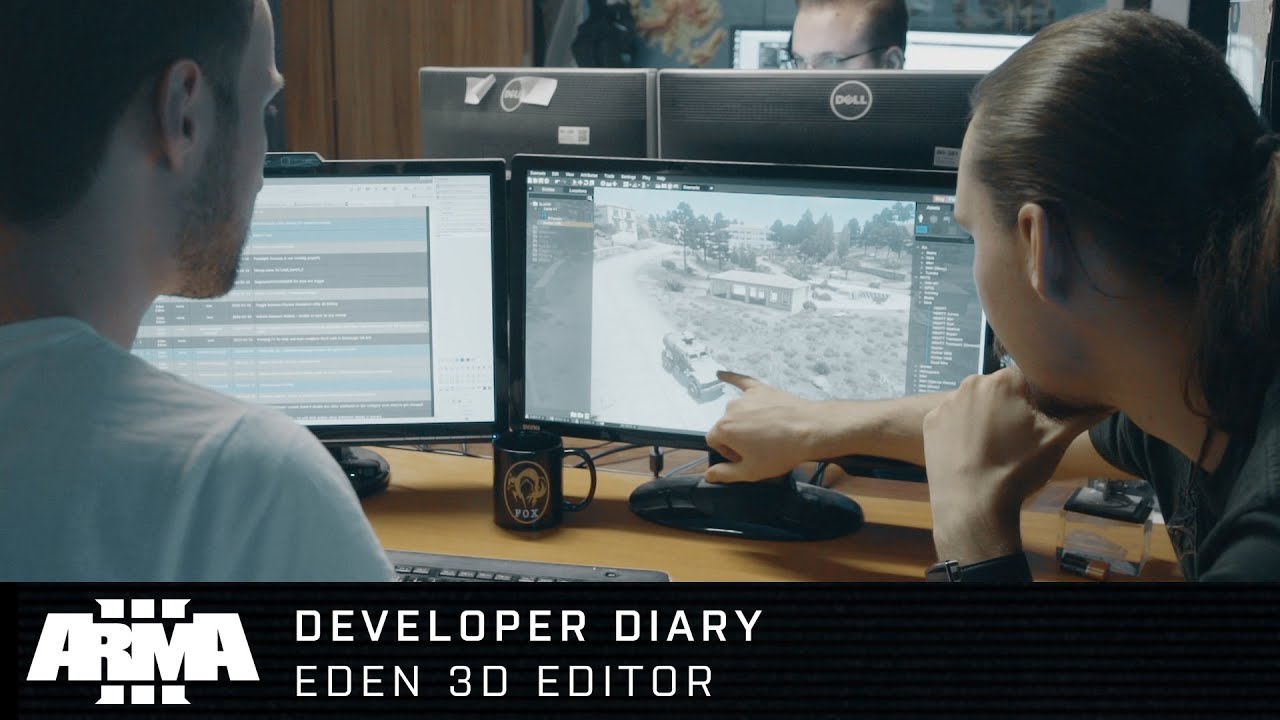 We're also interested in your thoughts on the translation of Eden Editor's texts. Localization coordinator Vojtěch Schubert welcomes your feedback in this forums thread. It's unlikely there will be many more tweaks before the upcoming update, but there is an opportunity to improve wording, phrasing and other linguistic aspects later.

We introduced our new Playable Content Designer Jan Čepera in last week's report. Inspired by this first sighting, our embedded reporters captured a glimpse of the illusive prey in his natural habit on last week's dev photo. Are you interested in a job with Bohemia Interactive yourself? Check whether our careers page has any relevant openings for you!

Congratulations to the ALiVE mod team on their 1.0 release! Having been developed for over 3 years, this advanced modular framework lets users set up large-scale military operations to provide hours upon hours of dynamic gameplay. A lot of multiplayer units and communities have been using versions of this mod in their sessions with great results. They have also hinted at a strategic change of direction, which will see them moving to an open development method in cooperation with the community. You'll find all the details, credits, download links and documentation in their forums announcement post.

The new fonts in Eden Update already enhanced legibility to a large degree, but there was something still not quite right. Senior Programmer Lukáš Bábíček took it upon himself to introduce font metrics which allow for improved kerning. The end result may be hard to notice without direct comparison, but it should make texts even more comfortable to read. And on that note, if you're reading this report on our website, you'll notice we've switched to the new fonts there as well now, tying together the game, Launcher and web.

One change in 1.56 is to disable stencil shadows in the Video Options, and to replace the lowest quality setting with lower quality shadow buffer shadows. Programming Lead Ondřej Martinák shines a light on this tweak: "Stencil shadows are still present in the game for certain objects (characters and vehicles). The reason is that they look better in some circumstances such as first-person view. We have removed the option to force stencil shadows for all objects as it didn't help performance nor quality (which it did in the past). This removal also allows us to automatically generate shadow LODs (using shadow maps) for objects. This lets us speed up building art production, and might help community terrain creators in a similar way."

Another huge addition in Eden Update is the Launcher-based Server Browser. We've published the second in our series of top 10 blogs about that useful new way of getting to a good multiplayer session. Use more powerful filters, skip the main menu, resolve Workshop mod requirements, and generally have a better experience when looking for online fun.

We don't really have a comprehensive status update about our experimental ports to Linux and Mac OS. The 1.54 update for these platforms is still being tested and platform-specific issues are being dealt with. Some of the recent testing was affected by needing QA for the primary Windows 1.56 build. So the port update is still in progress, and we'll try to get it live as soon as we can.

Another week, another anti-cheat update - this time targeting one specific new hack.