reported by Krzysztof Bielawski on September 22, 2014 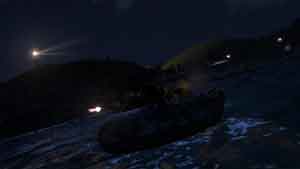 Firing from vehicles. Three simple words that have echoed through the walls of Castle Bohemia across the ages. There have been different variations - Cargo Marksman, Person Turret, Shooting from vehicles - but the meaning stays the same: players (community and developers) simply want to use their personal weapons and equipment while seated in a vehicle.

Sitting on the bench of Littlebird - holding the gun idly in your hands while enemies attack your chopper - we have seen that for far too long. The time for change has finally arrived! We'd like to share a quick overview of this new feature, discuss what it means for our mod-making community, and look ahead to what's next.

There have always been proposals to make Firing from Vehicles (FFV); however, there have also always been many 'buts'! We have seen several scripted solutions - and done several for ourselves as proofs of concept - yet, still we lacked the perfect solution. There are several factors that we had to take into account and compromises to make in order to bring this feature to its current state in terms of the available vehicle cargo positions and the player's capabilities.

From a player's perspective, controlling a character in an enabled position is very similar to hitching a ride in a standard cargo position. Of course, everything changes when you raise your weapon; you are now able to use optics and attachments, throw grenades, switch zeroing and aiming types and, last but not least, shoot! Actually, you may find yourself shooting quite a bit, as your precision may suffer due to the movement of the vehicle.

As for the vehicles, preparing each and every position takes a lot of time, so we have had to decide which vehicles to do first and which to leave behind. To begin with, we wanted to provide a mix of land, sea and air options. While it would have been great if we could make all positions FFV-friendly, there are still some limitations; mainly, the lack of space to manipulate weapons. Although (as a good passenger with fastened safety belts) you are still unable to move around, you are not alone: other players - and even our AI - have been properly trained to handle firing from vehicles.

We've struggled hard to not only add something new but, with the same importance, sought not to not break anything that we have delivered before. We might possibly have missed something, but we are standing ready to solve possible issues if needed. During FFV's development, we ourselves have broken our campaigns (thrice actually) in the progress; furthermore, the wide variety of community scenarios may yet throw us some curve-balls.

Naturally, we have not forgotten our dearest modding community. To prepare some surprises for their players, scripters may use new command enablePersonTurret, together with adjusted moveInCargo and assignAsCargo. Creating a new vehicle or adjusting an existing one to include FFV capability should be rather easy to achieve. Our sample models are going to be updated with new parameters, while there is just a few of them to make all configuration easier.

Modders accustomed to turret creation can simply add isPersonTurret and showAsCargo parameters, which should do the trick for most situations. Advanced modders may even try to play with some dynamicViewLimits parameters to simulate a tighter space when someone is sitting next to you.

We have had a lot of fun testing the new features in our team, and have some plans for future updates up our sleeves already, some of them well hidden for the new helicopters in the upcoming DLC, others held by lack of time to implement them properly.

However, with the release of the feature to dev-branch, we're now focused upon your feedback; there is a lot done and possibly the same amount of stuff to be done in the future. We are also sure that our community will be able to use the new technology in the ways we didn't even imagine so, go on, enjoy the feature and surprise us!