Since January – in part based on community feedback – we've invested time into updates and fixes. Below, we summarise this progress and share our plans for upcoming new features.

IN WITH THE NEW

Recently finished UI tweaks and functionality changes for the UAV Terminal should create a more intuitive user experience. Aside from UI redesign, we've also added new control elements. It’s now possible to create markers on the map directly from the terminal by double clicking LMB. You now also have the ability to disable autonomous behaviour. Basically, although drones have AI to scan automatically for enemies, plan its path, etc., it's now possible to disable this feature and transform any UAV into an 'ordinary vehicle'. This benefits situations like reconnaissance where you want to be sure that your UGV won't do anything stupid!

Another useful feature is the 'AV Camera' – a live feed from your drone – that can be viewed without opening the terminal. It enables you to use various modes (e.g. thermal and night vision) and see what’s happening around the vehicle (or your own squad), which can be particularly useful during combat. 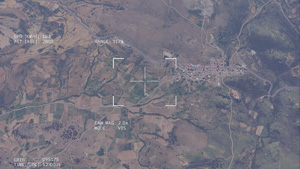 We also received feedback regarding improved and additional control over UAVs. For example, you're now able to control the movement of UGVs while in the gunner position (avoiding the need to switch between gunner/driver every few moments). Furthermore, connecting into UGVs has been tweaked; there are now separate options for entering as driver or gunner via the terminal, bypassing the need to enter first then switch. In terms of weapons systems, authority over firing missiles on fixed-wing UAVs has moved to the gunner position.

Additionally, the functionality of laser designation has been tweaked. Previously, you had to mark a target and wait for the AI to fire. However, sometimes it would first alter course. Given that UAV missiles and bombs are guided (a drone only needs to fly in the approximate direction of a target), this sometimes caused unneccesary headaches! Now, drones will stay on their path (defined by waypoints and commands issued via the AV Terminal). You may simply send a fixed-wing UAV to a given position, designate the target, and fire manually.

So, what's next? Well, aside from fixing and polishing, there are also some more complex features which we'd like to implement in the near future. 'Camera locking' – enabling drone operators to lock the camera on a given position and keep it once UAV controls are released – is one of these additions, which we hope will make the 'live feed' an even more powerful tool. Stealing enemy drones, too, was a feature raised in community feedback. Although several simple proposals have so far been considered, we've ran into some drawbacks for certain types of game modes. But, fear not, we've looked into other options and we hope to deliver some sort of stealing mechanic soon™.

Overall, given the increasing role that drones play on the modern battlefield, we hope that the UAV systems presented in Arma 3 are more user-friendly and that drones will feature more often as a regular part of missions. If you have any further feedback to UAV system, let us know and help us create even better game!