One of the latest Arma 3 Dev-Branch updates introduced a prototype of a cooperative scenario called COOP 12 Combat Patrol. The development of this scenario started out as a pet project by our Senior Technical Designer Josef "Jezuro" Zemánek and myself more than two years ago. It's now evolved into what might become an official multiplayer scenario/mode in the game.

However, before that happens, we wanted to share it with you and see whether you like it as much as we do. In this OPREP, we'd like to highlight some of Combat Patrol's qualities in detail - and, most importantly, invite you to play it, provide feedback, and/or even modify the original concept to your liking. 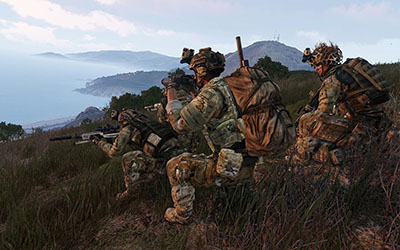 Combat Patrol offers quick cooperative gameplay by placing you and your squad mates together into an infantry team, and giving you the option to select the area that you want to play in. Each session is different thanks to the scenario's heavily randomized nature. That said, compared to some of the more broad and complex community frameworks for randomized scenarios, Combat Patrol is much more straightforward. Instead, it offers a quick and simple gateway to a more hardcore Arma experience.

In fact, the intention behind the very first prototype of Combat Patrol, which we called "MOUT Training" ("Military Operations in Urban Terrain") back then, was to offer instant challenging combat with a little team of friends against Arma's AI, without making things too complex. This prototype scenario helped us internally to introduce some of our new colleagues to 'classic' military sandbox gameplay - and the randomized nature of the scenario ensured replayability.

The first location we used was the Altian town of Athira, and the goal was to pass through a chain of five randomly selected objectives, which the players had to find using only their map and compass. In the process, players also had to battle a few randomized infantry groups. However, we eventually became bored of playing in a single location. Thus, we came up with the idea of generating the scenario in every village based on a map's key points.

Once Josef Zemánek managed to bring the same gameplay to every village on every official map available in Arma 3, we spent significant time just 'browsing' the locations in various daytime and weather conditions. With all those different locations, the replayability skyrocketed as well, leading to some of our most intense or funny gameplay moments, many of which we remember to this day.

Admittedly, the scenario was still rather crude, and especially the way that objectives were presented was considered too abstract by most of the players. However, thanks to the joint effort of our Sandbox Designers (Miloslav Cinko, Radko Voda), QA (Radek Pazdera), Josef Zemánek as the Technical Designer, and the plentiful and passionate internal feedback we received, we've now reached a version polished enough for a public test.

In the latest iteration, which takes place on Altis, you can vote for the scenario's location, the amount of OPFOR scales according to number of players, there are custom-created roles designed for the PvE experience, we came up with a plausible scenario objective, and you can tweak the difficulty by changing the mission parameters. 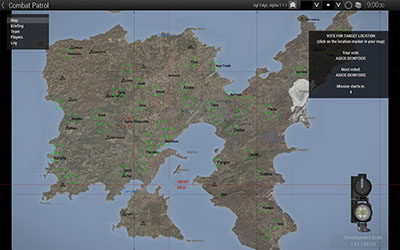 While many of us here are no die-hard milsim players, we appreciate a challenge that comes not only from the firefights, but also team coordination and tactics. From the very start, we attempted to design Combat Patrol in a way which would allow us to play on a high difficulty, but the challenge would still remain acceptable - even for the less experienced player among us. Even so, we actually ended up playing with most of the GUI elements turned off or toned down, and on a pretty high difficulty.

On many occasions, we failed miserably, and we still do sometimes. But we found that, what might sound as Combat Patrol's shortcoming, is in fact its most interesting feature. Once we learned to cope with the challenge, we realized that defeat was always due to our own mistakes: botched reconnaissance, failed execution of the plan, or a complete disarray in team communication and role play. The good news is that after several of those games, people tend to improve in many ways. The team becomes coherent, people truly cooperate and communicate, tactics and interesting solutions emerge. The occasional moments of gallantry suddenly stop leading to casualties.

In order to make the most of playing the scenario, don't be ashamed to play slowly, scout your surroundings, plan your movement and retreat if you get under too much pressure. The key is to keep moving, remain one step ahead of the enemy by flanking and deceiving them, and avoid alarming the enemy garrison too early as there are enemy reinforcements waiting for the signal. As can be said about Arma 3 itself, Combat Patrol rewards patience, thoroughness, and cooperation. 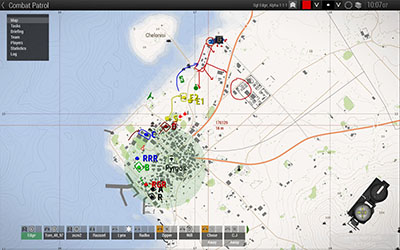 We're still working hard on improving Combat Patrol. Our ambition is mostly to nail down the balance and difficulty of the experience, and to further enrich the content. We are discussing new objectives, musing about adding some non-urbanized locations, as well as taking the gameplay to other Bohemia terrains - of course, with different factions to play for and against. There's a pool of brainstormed objectives which await implementation and testing.

Besides our own efforts, we aim to offer the scenario's code to the Arma 3's creative community for free use. An example of the usage of the modules is currently available in Arma 3 Samples, and we hope to make full sources available under the Arma Public License - Share Alike (APL-SA) in future. Naturally, we are also interested in your experience with the scenario. Although we've had dozens play-tests in various stages of development, its random nature may often lead to very unexpected results or reveal shortcomings that we haven't yet come across. I'm sure there will be plenty of ideas and bug reports, and you are welcome to post them to the official forums and/or Feedback Tracker.

You'll find the scenario once you switch to the Development Branch. It's also hosted on some of our official servers (which you can filter in the Launcher Server Browser) until the end of this year.