Weapons are the backbone of Arma. They are the core of the gameplay. As such, they require a lot of attention and that's exactly what we're trying to give in Marksmen DLC. We want to provide interesting choices of weapons that, aside from being visually distinctive, offer new and fun gameplay possibilities. Here we'd like to explain a bit more about the choices we made as well as the process that led to them.

When thinking about weapons you need to consider how they behave, and that's why we threw ourselves deep into the pit of Weapon Handling. That has several layers, consisting of Weapon Recoil, Weapon Inertia, Weapon Sway and Fatigue, all of which can greatly influence gameplay. To counter-balance this, we've taken it a step further: in Marksmen DLC, we will introduce new mechanics known as Weapon Resting and Weapon Deployment. Each has a significant impact upon the way you play or behave on the battlefield.

We selected weapons that could best demonstrate and take advantage of these features. We started with the idea of a marksman as a team member, not a 'lone wolf'. This was a difficult choice, especially with players' expectations in mind. This is why we've tried to explain the difference between a marksmen and a sniper. Of course, we known that this is not an easy task and even the explanations and opinions differ. Nevertheless we made the choice, and we are happy with it.

The marksman is an incredibly lethal unit that can drastically decrease life expectancy on the battlefield. And what makes a marksman stronger than a high-powered weapon which can be deployed in a heartbeat? With this in mind, we looked at the relatively new concept of MMGs, and it instantly clicked for us. We started to imagine various interesting situations that could arise from heavy suppression in the game. For example, what if you have a marksman teamed up with a heavy gunner? Serious firepower that is. A heavy gunner in your team can compensate a great deal. Laying down suppressive fire from a deployed position with a high power scope; he's pretty much a marksman by himself. It also gelled well with our idea to put bipods into the game. And that's how the selection of weapons for Marksmen DLC all began.

When we were looking at the concept of marksmen units, some things came to us naturally. DMRs were the first choice of weapons. They are the basis of any marksman out there, they are fun to play with and they are fun to develop. So, we started looking around for those beauties we'd put into the game. We've considered many well-known weapons but decided to do things differently.

Let's take a look at one 'case study', the Mar-10, which might hopefully provide a bit of insight into the process behind each weapon. 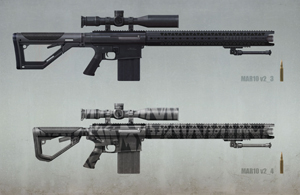 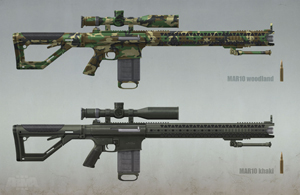 I've personally always liked Noreen Bad News, because it's based on the AR platform and it offers huge power in a semi-heavy package. The Lapua Magnum round is something we hoped to introduce one day and this was the perfect opportunity to do so. After we gathered some initial reference material, we prepared a quick concept of how it could look. However, we were worried that the weapon on its own would not be interesting enough to look at. That's why we took the concept a bit further, and made it a big gun, a beast essentially.

In the concept stage, we pretty much looked at the visuals and played a bit with the biggest parts of the weapon: the barrel and the buttstock. It was shaping up quite nicely, and we decided to make some other color variants. After that, we looked at how would it work compared to other weapons in the game, which led to an agreement on the ammo that would be used for the weapon. It was an easy decision. The Lapua Magnum has very beautiful features. Once all of these decisions were made, we had our final concept.

After the concept stage, we started prototyping the model in-game. This took multiple iterations before we settled on the final shape. One issue was that the gun was too long to fit our character, so it meant we had to make some changes. However, perhaps the biggest challenge was finding the right pair of iron sights. We wanted working iron sights, and this was not an easy task, considering that the new weapons are not one-to-one replicas of the real-life counterparts that inspired them. For example, the Noreen actually doesn't have any iron sights, so the fact that our weapons are not direct copies of existing weapons affects the decisions we make about things like the available fire modes and other features. Ultimately, we make our decisions based on the gameplay value they offer.

To support this new weapon, a new scope was made. We were really looking forward to it, as the AMS is much like the DMS, which I personally think is one of the best and usable scopes in the game. We rigged everything together and tested the weapon in the game. Some details were not right and we had to iterate more than once on the size and position of certain parts. However, eventually when I tested the weapon in a simulated firefight, I was really happy. It finally felt like I was holding a gun that is worthy of being in our game!

After a period of discussion and iteration, we finally reached the point where we were happy with all of the selected weapons, the concept-art sketches, the prototypes and, eventually the production. Now the weapons have arrived on Dev-Branch, which means we'll complete the tweaking and polishing with the help of the community. So, let me present each new weapon, and pick out a few interesting details.

Some of you might notice that the names of the weapons have some meaning. Nevertheless, we always wanted something more from the names, and unfortunately we are not very keen on cheesy names like Dagger nor are we happy with simple NATO designations like SPMG. So we started giving them names - names that have some meaning.

For example, did you know that Zafir means Victorious or that Rahim means Merciful? Although those are mostly Persian or Arabic names, we think it adds a neat touch to them and a bit more personal feeling to the weapons. So, naturally, with the new additions we did the same: Cyrus translates as Far 'Sighted'; Kir is another variant of that; Navid means 'Good News'. It's a small touch that not everyone will catch, but it makes us happy to consider even these little details.

During development of the weapons we touched other subjects that were - and still are - highly upvoted on our Feedback Tracker. Yes, let's talk about the wind affecting ballistics feature - which we call windage - and simulating 'one round in the chamber', thus allowing us to have not only 31 rounds total in a gun but also being one step closer to simulation of bolt action rifles. Let's call this 'chambering'.

In truth, simulating wind-affected ballistics is not the most complicated task; the real struggle comes with the way gameplay is affected by it. Little details like counting how much a bullet is affected at what speed become irrelevant very quickly. The reason is probably surprising to most looking at the company from the outside. How would we tell the player how strong the wind is? By some gadget, one might say, yes, but what if you don't have the gadget? How would you tell the player the strength of wind? Wind is so natural to people - you can feel it - but this feeling is something we can't put into the game. We also considered showing the strength of wind by particles raising up at the target you are aiming at. We had several ideas but we hit a big wall during the process.

That wall is performance. Especially in MP it would be hard to measure, show and compute all the necessary 'helpers'. Our timeframe is limited and the gameplay value is very uncertain because it would make long range shooting much harder than it is. And considering Arma already has a pretty steep learning curve, it could drive away some people that would like to enjoy the game as it is. Some people might say it could be a game option, but should we clutter the game options even more? These questions are very real and very important to us. There are too many questions that don't have very clear answers. That is why we decided not to add this feature to the Marksmen DLC. We are still positive that these can be answered, and with a not-significant amount of time, resolved.

This was another topic that we brought up in the pre-production of Marksmen DLC. However, there is one simple fact that we can't be oblivious to: weapons in Arma are merely 'shapes'. That means they contain no information about the magazine or ammunition in them. The implementation of such feature would require vast amount of time and effort and - since we already planned big features that you can enjoy (deployment, recoil overhaul, resting, audio overhaul and some basic changes to suppression) - we put the effort and gain to scales and decided to postpone this feature. Much like windage, it is not impossible to do, but again, the balance of effort to value was very disproportional - so we made a decision.

Nevertheless, we hope you'll enjoy the other features that we prepared for you to enjoy. Deployment is shaping up really well and resting is already in the Dev-Branch.

We hope this answers some questions and sheds more light on what is called game development. Everything has a solution but not everything is meant to be how you might imagine. The new additions of weapons should give you a very good basis for squad gameplay. Imagine MMGs deployed on a high ground as a base of fire, while the advance of the rest of the squad is covered by a high powered rifle in the marksman's hands.

This is the game we live and breathe, and we are always eager to listen to what our players have to say. You are the proof of the game's success.